I lost another old friend today who I’ve known for over 35 years. Ann Swenson was a gifted person in so many ways, she was one of the greatest channels I ever met and helped me with my sister’s death many years ago.

She went through a traumatic divorce and her daughter became a paraplegic following a car accident while going through her divorce. She later studied and became an accountant doing taxes yearl for so many. Her daughter died in the past 5 years and Annie developed lung problems that finally took her life.

We love you Annie, have a blessed journey home. See you later in the afterlife. 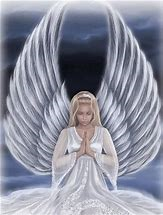